Maisie Williams Gets a Buzz Cut in Her Latest Hair Transformation 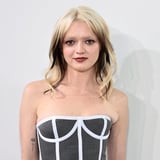 Maisie Williams is never one to play it safe when it comes to her look. The "Game of Thrones" star has had pink hair, a blond mullet, bleached eyebrows, and a brunette bixie cut, to name a few, and now, her latest transformation comes in the form of a closely cropped buzz cut.

The 25-year-old unveiled her new look to her 10.1 million Instagram followers on July 30 as she took selfies from her vacation in the Seychelles. In one photo, she is seen wearing taupe eyeshadow, mascara, a brown crochet halter-neck top, and gold jewelry as she reveals her neatly shaven head, proving she can pull off any hairstyle and look amazing. In the next image on her Instagram carousel, Williams is photographed laughing on the beach with an oversize green shirt and a super-cute crochet bucket hat. She captioned the photos with "washing head w facewash>" as she joked about the low-maintenance style.

This is the latest punk transformation that Williams has undergone since starring in "Pistol." After attending the Met Gala in a gothic-inspired monochrome outfit, she embarked on the press tour for Danny Boyle's six-part series about the British band the Sex Pistols, in which Williams plays the part of Pamela "Jordan" Rooke. Wearing a mix of colored tulle skirts, fishnet dresses, black sequined lace, and dramatic black eyeliner, Williams certainly understood the assignment when promoting the iconic fashions of the show.

Williams has long been a champion for gender-fluid wardrobes and has spoken about once feeling the pressure to conform to more traditional beauty standards. Speaking to Porter magazine in April, Williams said that cutting her hair into a mullet was a turning point as she decided to do something for her that felt right. She has since stuck by this mantra, and it's clear to see that her constant style changes are most certainly always right.

Along with her fashion designer boyfriend, Reuben Selby, Williams continues to reinvent her look, and she's not the only celebrity who is championing buzz cuts either. Actor Joey King, who shaved her head for "The Act", recently said in an interview with Allure, "I think every woman should shave her head at least once in her life. It's not like they're going to regret it 10 years down the line when their hair is long again. It's something that's very freeing, really fun, and really empowering."

We can see from Williams's Instagram post that this is the vibe she is feeling, and there's no doubt she rocks it.