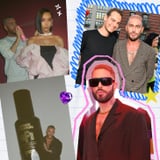 Welcome to Big Break, where some of the most influential figures in the beauty industry reflect on the moments that made them - from the good to the bad and everything in between. Here, hairstylist Andrew Fitzsimons shares his journey to becoming a celebrity hairstylist for clients like Megan Fox and Khloé Kardashian, as well as becoming a brand founder.

For Andrew Fitzsimons, it was always going to be hair. Having started his career at age 13, there was never a plan B. Fitzsimons grew up in Dublin, Ireland, and attended an all-boys Catholic school, which he recalls as "not the best environment" for a young queer person. "It was a strange childhood where I had to dim my light to make other people feel comfortable," Fitzsimons tells POPSUGAR.

Growing up, his days swirled between happy and safe with his mom and sister at home to toxicity when around peers at school. That's what led him to ask for his mom's help in finding a summer job. "I knew that money meant agency, and I really wanted independence," he says.

He landed a summer job at a hair salon, which instantly felt like a perfect fit. "I'd always messed around with art, hair, and makeup growing up," Fitzsimons says. "[I was] interested in what then I was told were 'girl things' - it just felt natural."