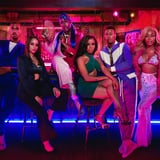 If you're one of the thousands of people whose hearts skip a beat when you hear the sing-song words, "Down in the valley where the girls get naked," then there is zero doubt that you are a true "P-Valley" fan. The series, which follows the lives of dancers at The Pynk, a fictitious strip club in Chucalissa, MI, has become known for its emotional storylines, relatable characters, and, most importantly, the beauty moments in each episode.

From Uncle Clifford's blinged-out nails to Mississippi's trendy makeup looks, each episode of the show is packed with beauty moments that viewers won't soon forget. Of all the looks on the show, however, the hairstyles are a show all on their own. From the intricate play with color to the natural hairstyles seen on some of the characters, the hairstyles on the show play an integral part in furthering the storyline. With season two finally here, the styles are only going to get bigger and better.

"This season has a touch of fantasy and fairy tales," Arlene Martin, "P-Valley"'s hair-department head, tells POPSUGAR. "There are a lot of the twists on the classics like Rapunzel, Little Red Riding Hood, and the Big Bad Wolves, for example. Just a lot of twists on the fantasy hair." For season two of "P-Valley," Martin gave some behind-the-scenes secrets from the set and revealed everything from the spiritual aspect of some of this season's hairstyles to her favorite products to use on set ahead.

If the hairstyles from "P-Valley" look a bit more grandiose to you than those on the previous season, your observational skills would be spot-on. "The main difference between the hair from season one and season two is that this season was a little bit more upscale," Martin says. "The wigs this year are more flamboyant and more colorful. There are also just a lot more wigs this year in general in comparison to the previous season. So with that, there's a lot more variety of colors, textures, and hair designs. This season was definitely no holds barred."

As for the brains behind the ideas for the wigs this season, Martin gives all credit to the show's executive producer, Katori Hall. "Katori was definitely the one who spearheaded the vision for the wigs this season," Martin says. "She gave me the direction on what the wigs should look like, and I, alongside my team, perfected and mastered them. It was definitely a partnership."

The Customization That Went Into Each Wig on "P-Valley"

There is one thing that viewers may not grasp when watching the show: each wig was customized for each actor on the show. "One thing that people are often surprised by is the fact that the wigs were custom colored and custom cut," Martin says. "We did everything in house (or, in trailer), and they were all designed by me and my team. People tend to not realize how much time goes into wig customization and styling."

The longest it took her to make a wig on set? An entire week. "That was the crown wig with finger waves on the first episode for Uncle Clifford," Martin says. The most intricate part of the wig was the technique, as it had to be created in layers to create the crown illusion.

How the Hairstyles on "P-Valley" Stayed On During the Stunts

One of the most important parts of the entire hair-creation process was ensuring that the wigs stayed put as the actors danced on the poles. And that took extremely intensive prep work. "I made sure that my team had each and every wig prepped and ready before the actual scene was even getting ready to be done," Martin says. "We prepped the wigs at least a few days before, so they were already ready when the actors came in the trailer."

As for the actual products used to keep the wigs in place, some of Martin's holy grails included clips and glue. "Prepping each actor's actual hair on set entailed a lot of hair clips, bobby pins, and hair pins to make sure that those wigs stay down and stay in place at all times," Martin says. "We also used a lot of wig glue and added a lot of adhesives to the wigs, just to make sure that there were no mishaps. My team, which included Jason Yancey, Latoya Kelley, LeVura Geuka, Kasi York, and Demetress Valentine, were absolutely amazing, and we had no mishaps on set with any of the wigs falling off."

The "P-Valley" Character With the Most Creative Hairstyles

The character with the most creative hairstyles on season two should be of absolutely no surprise to you, but what may be surprising is how Martin approached one of their wigs. "There were no limitations to the creativity that was used to create Uncle Clifford's wigs," Martin says. "Creating those wigs was like having complete freedom, so I just leaned into that magic and dived head first into his styles."

There was also a spiritual aspect to the creation of one of Uncle Clifford's wigs. "Once when Katori did give me direction on one specific look for Uncle Clifford, I went back to the trailer and literally, I got a burst of inspiration from my ancestors. It just all came at me at once. I just started to grab hair and put things together," Martin says. "We ended up creating this absolutely amazing piece for Uncle Clifford, and I dedicated that wig to my ancestors. We call it the ancestor wig to this day and for me it was like a tribute to my ancestors who crossed the waters of Africa, and for every person that died on the way. Due to the long ponytail, we also nicknamed it the Trail of Blood, so to me, it's more than just a wig. It was like a spiritual awakening for me to be able to create that wig."

The Best Hair Products Used on the Set of "P-Valley"

With heavy expectations to live up to, Martin knew that the products used on the set of "P-Valley" had to be the best in order to get the job done. Some of her favorite products included: The Arlene Martin hair-care line, which are products from her pending cosmetics line; Aerogel hairspray ($10); Big Sexy Hair Powder Play Volumizing & Texturizing Powder ($19); and Oribe Dry Texturizing Spray ($49). Of all the products used on set, these, she says, took each hairstyle to a completely different level.

While there are still plenty of episodes left in season two of "P-Valley," if the first two episodes are anything to go by, there will be plenty more hair moments that will absolutely leave the beauty-obsessed among us wanting more. But until then, consider this sneak peek your all-access pass to all things hair for "P-Valley" season two.