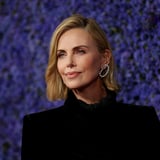 Charlize Theron debuted a new haircut and hair color over the weekend at the Charlize Theron Africa Outreach Project 2022 Block Party on June 11. The actor, who can typically be seen with golden-blond hair, had a new dark brunette hue, but the color wasn't even the most surprising thing about her look. She also wore a mixie haircut, proving the trend still prevails.

For those who aren't familiar, the mixie was predicted to be one of 2022's biggest haircut trends, and it's easy to see why. The cut is similar to the popular bixie haircut, which combines a bob and a pixie, but this style instead combines a mullet with a pixie haircut.

"A mixie is an edgy haircut that is longer in the back, like a mullet, and short, like a pixie, in the front," Jenny Cho, celebrity hairstylist, previously told POPSUGAR. "[The] haircut feels uniquely different from what we've been seeing but also has a slight '70s retro vibe that feels familiar."

Theron's version of the haircut trend features choppy, side-swept bangs that perfectly frame her face and blend seamlessly into the longer mullet at the back of her head. The hairstyle, paired with her fresh-faced makeup and curated ear piercings, makes for an edgy look.

Take a closer look at Theron's new hairstyle ahead.