How to Get Rid of Stubborn Pimples Under the Skin 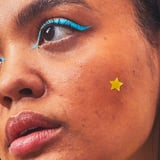 Some pimples pop up overnight with little to no warning. Others make their arrival known long before they ever come to the surface by causing a painful lump. The latter is a pimple under the skin, aka a blind pimple, and they're notoriously uncomfortable and tricky to get rid of.

Unlike whiteheads, which sit on the surface and have a puss-filled head, or blackheads, which cause little black specks in your pores, a pimple with no head that's lurking under the skin is nearly invisible to the eye. The only way you know it's there is because you feel it. These types of pimples can be rather stubborn - not to mention impossible to pop.

Getting rid of a hard pimple under the skin isn't impossible, but it's no easy task. Acne patches only work on zits that have a head, and most spot treatments are designed to treat pimples a little closer to the surface, but that doesn't mean there's no hope.

Keep reading to learn more about pimples under the skin, what causes them, and how to treat them.

What Causes a Pimple Under the Skin (aka a Blind Pimple)?

All pimples are formed by the same basic factors: bacteria, dead skin cells, and excess oil or sebum. "Skin cells stick together within the pores, creating a bottleneck that traps oil underneath," Joshua Zeichner, MD, FAAD, New York City board-certified dermatologist and founder of Jori Skincare, tells POPSUGAR. "This leads to an overgrowth of acne-causing bacteria, stretches the follicle, and causes inflammation."

However, some pimples or clogged pores come to the surface while others get trapped under the skin. "When bacteria and byproducts draw in immune cells to the clogged pores, it causes inflammation, and that's how a painful blind pimple is formed," board-certified dermatologist Michelle Henry, MD, FAAD, says. "This bacterial inflammation is what causes some pimples to form under the skin as opposed to the surface."

Why Pimples Turn Into Hard a Lump Under Skin

Occasionally, deep cystic pimples can turn into a hard lump under the skin, causing them to last for months. "Deeper pimples, also known as nodular pimples, also form from clogged pores," Dr. Henry says. "However, nodular pimples appear when the inflammation from the bacteria goes deeper and is more robust. That is why nodular and hard pimples are found deeper into the dermis and have that signature lumpy feeling."

How to Get Rid of a Pimple Under the Skin

Treating a pimple under the skin isn't easy - the best course of action is actually prevention. "Think of your face as having thousands of pipes connecting your oil glands to the surface of the skin, and [for] people who tend to break out, all of those pipes are somewhat clogged, and we cannot predict which one will turn into a pimple," Dr. Zeichner says.

To help treat existing breakouts and keep new ones from forming, he recommends targeting the entire area of the face where you typically break out, and benzoyl peroxide is the best acne-fighting ingredient for this because it helps lower the levels of acne-causing bacteria and reduces inflammation.

But not all benzoyl peroxide products are created equal, and the ingredient can be potentially irritating. Dr. Zeichner recommends looking for a product with no more than 2.5 percent benzoyl peroxide, like the Jori Skincare Daily Leave-On Acne Treatment Mask ($52), as it's been shown to be "as effective as higher concentrations but associated with less irritation."

Salicylic acid and retinoids are two other great ingredients for treating under-the-skin pimples, but they work very differently. "Vitamin A derivatives increase skin-cell turnover and reduce sebum production and accumulation in the skin," Dr. Henry says. Therefore, retinoids are great for preventing new pimples. Just start slow and be cautious of irritation. You also shouldn't use a retinoid as a spot treatment but instead apply it to the entire face to see the benefits after a few weeks.

Salicylic acid, on the other hand, is great for "removing excess oil from the skin and removing dead cells that block the pores," Dr. Zeichner says, and can be used as a spot treatment for a targeted approach to treating cystic pimples. We like the Bliss Clear Genius Acne Spot Treatment ($12) and the Murad Rapid Relief Acne Spot Treatment ($25).

These ingredients, plus a "warm compress to ease the pain," as Dr. Henry suggests, are the best ways to speed up the timeline of a pimple under the skin.

How to Pop a Blind Pimple

Acne treatments don't always work overnight, which is why we understand that you may be asking yourself: can I just pop this? Experts will never recommend you pop a zit for a number of reasons, but that's especially true for pimples under the skin.

"When we see a cystic pimple in the mirror, our first instinct is to pop and push out the contents to the surface. That's the total opposite of what we should actually be doing," Dr. Henry says. "Cystic pimples are often too deep to pop, and the irritation of the skin may lead to further inflammation."

Pimples like these are located too deep in the dermal layer of the skin and don't have a clear connection to the surface to release the contents of the clogged pore. Squeezing and poking at them with your fingers - or a pin - will most likely lead to more harm than good. "You can traumatize the surface of the skin, leading to a potential infection, scab, or even scar," Dr. Zeichner says. "The trauma that you caused at the skin and the healing afterward often last much longer than the original pimple would have had you left it alone."

Rather than attempting to pop a pimple under the skin, if you need it gone overnight, you can visit a dermatologist for a cortisone shot, which can yield results in just a few hours.

Overall, pimples under the skin just need time to heal. If all else fails, seek help from a professional.