What Are Those White Spots on Your Nails?

Home 2022 May 2 What Are Those White Spots on Your Nails? 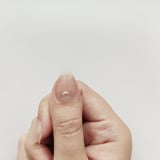 Although you might not be aware of it, the condition of your nails can be an indicator of your general health. Any nail abnormalities, such as sudden color changes or intense breakage, can sometimes suggest a more serious underlying health issue. If you have white spots on your fingernails or toenails, you might be wondering why, and whether or not it's a cause for concern.

Healthy fingernails are typically a light, flesh-toned color that's consistent throughout the nail, and they are free of grooves, indentations, and any spots or marks. However, if you have experienced white spots on your nails - as many people do at some point, usually after removing nail polish after long periods of time - the good news is that the condition is generally pretty harmless.

We consulted with Anar Mikailov, MD, board-certified dermatologist, founder of KP Away, and co-founder of Skintensive, to explain everything you need to know about those white spots on your nails. Keep reading to find out what causes white spots on nails, how to treat or prevet them, and more.

What Are the White Spots on My Nails?

What Causes White Spots on Nails?

Pseudoleukonychia, however, is more common and usually fairly harmless. It can be caused by a nail fungus, nail polish changes, or damage or injury to the nail bed. Something as simple as an aggressive manicure or hitting your hand on a door can cause trauma to the nail which can lead to white spots. It's always best to check with your doctor if you have any reason to believe these are potential causes.

Can You Prevent White Spots on Nails?

Because those white spots on nails are most often caused by damage or injury to the nail bed, you could try being more careful with your nails, eliminating nail-biting, and asking nail technicians to be gentle when receiving manicures.

Otherwise, you'll want to continue taking care of your general health to avoid developing more serious health issues such as diabetes, liver failure, or kidney failure. If you do that, "You should not develop leukonychia, but often we will not know that we have one of the above problems until after the white nails are noted," Mikailov says.

Since sometimes the spots can be a result of calcium deficiencies, be sure to check with your doctor in case you can add a supplement to your daily routine.

How to Get Rid of White Spots on Nails