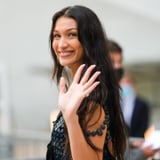 Trust Bella Hadid to pull off spring's buzziest haircut with ease. On Monday evening, the model shared a behind-the-scenes look at an upcoming Michael Kors campaign, where she's sporting a face-framing mixie haircut. A combination of the mullet and pixie, the new hair trend is a twist on 2022's popular bixie cut, which blends the bob and pixie. While from the front, Hadid appears to have a pixie with micro bangs, her side profile offered a peek at her mullet in the back.

Her go-to hairstylist Evanie Frausto is responsible for the edgy haircut, which he accessorized with a cute hair clip to match Hadid's bright-yellow latex dress. Her bronze makeup, on the other hand, was the work of artist Grace Ahn. "Mixie as a haircut feels uniquely different from what we've been seeing but also has a slight '70s retro vibe that feels familiar," celebrity hairstylist Jenny Cho previously told POPSUGAR.

Though the bixie cut has been everywhere these past few months, with celebrities like Ciara, Alexa Demie, and Halle Berry hopping on the trend, it looks like the mixie is just starting to gain steam. The retro style appeared on the runways of New York Fashion Week and the red carpet at the Oscars, and we wouldn't be surprised if more stars experimented with the relatively low-maintenance cut. Take a closer look at Hadid's hair transformation ahead.