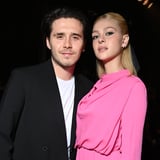 We're calling it now: Nicola Peltz Beckham's bridal beauty look is about to flood wedding Pinterest boards. The actor married Brooklyn Peltz Beckham in Palm Beach, FL, on April 9, and her hair and makeup were dreamy as can be. Peltz Beckham relied on her go-to hairstylist, Adir Abergel, for the special day, citing '90s supermodels as inspiration. "She's been sending me all of these rad images of early Claudia Schiffer, including pictures of her with bangs," he told British Vogue, adding that Brigitte Bardot's signature ponytails also influenced Peltz Beckham's half-up, half-down hairstyle. "It was all about keeping her hair beautiful, soft, and smooth," he said. "Think luxe, polished texture, but with fullness and movement to it."

Ahead of the nuptials, Abergel instructed the bride to prepare her hair for the Florida humidity by using Virtue's Restorative Treatment Mask ($32) for some extra hydration. He also lightened her hair color a bit to make it pop and, as he revealed on Instagram, cut her face-framing curtain bangs "moments before" the wedding. After applying Virtue's Healing Oil ($44) and Un-Frizz Cream ($42), he gave her a blowout and used a large-barrel curling iron to add some volume. The resulting hairstyle perfectly complemented Peltz Beckham's custom Valentino gown, lace gloves, and lengthy embroidered veil.

Meanwhile, Chanel makeup artist Kate Lee did Peltz Beckham's makeup, giving her a classic, understated look that let her beauty shine. "We decided on a very fresh, natural look - barely there but with a few interesting details that will pop under the veil," Lee told British Vogue. In addition to a neutral lip and full lashes, Lee gave her a dewy glow with Chanel's Baume Essentiel Multi-Use Glow Stick ($45) in the ivory pearlescent shade.

Read ahead to see all the photos of Peltz Beckham looking gorgeous on her wedding day for your weekly dose of bridal beauty inspiration.