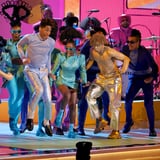 Before Jon Batiste won the coveted Best Album of the Year award at the 2022 Grammys, he gave a joyful rendition of his song "Freedom." Clad in a silver three-piece suit, Batiste jumped, danced, and sang the night away, getting a standing ovation after his exuberant performance. Though the monochromatic outfits worn on stage added a fun flair to the performance, the hairstyles are what really captured our attention.

While Batiste stuck with his usual fade haircut with twists at the crown of his head, his backup dancers wore everything from locs to bubble ponytails and even geometric updos. These hairstyles were created by none other than celebrity hairstylist Nikki Nelms, who put together 17 hairstyles in total for the performance.

"Jon gave me total creative freedom," Nelms told POPSUGAR. "I took inspiration from my previous work with sculptural updos and bold-shaped natural styles. The colors and music of the performance were the perfect backdrop for the hair to shine."

One of the key products Nelms used was the Maui Moisture Frizz Free + Shea Butter Elongating Gel ($7) to smooth and secure the hair sculptures.

Take a closer look at the hairstyles from Batiste's performance ahead.