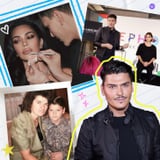 Welcome to Big Break, where some of the most influential figures in the beauty industry reflect on the moments that made them - from the good to the bad and everything in between. Here, celebrity makeup artist Mario Dedivanovic shares how he got his start in the beauty industry and became the go-to makeup artist for Kim Kardashian before launching his own namesake brand, Makeup by Mario.

Mario Dedivanovic is known as the man behind Kim Kardashian's signature look and has been her key makeup artist for more than a decade. Before he secured himself as a staple on the star's glam team, though, he had what he describes as a very sheltered childhood.

Born in the Bronx, New York, to Albanian immigrant parents, Dedivanovic grew up in the basement apartment of a building his father was the superintendent of. "We had super-humble beginnings," Dedivanovic tells POPSUGAR. "There wasn't really much beauty around where I lived, and I was always attracted to and sought beautiful things."

He would often ask his father to drive him around Westchester just so he could look at the spectacular homes and immaculate landscaping. His mom worked as a housekeeper in Manhattan and a cleaner for L'Oréal's office, and when he wasn't in school, one of his favorite activities was to tag along to peek at the apartments she visited.

As an employee at L'Oréal, his mom often brought home products from Maybelline New York and Lancôme, which enticed Dedivanovic. "I remember hiding in the bathroom, closing the door, and opening the medicine cabinet, and there was this little L'Oréal eyeshadow duo with a clear top," he says. "I remember opening it because I was so intrigued - I wanted to touch it and feel it." Still, he never did for fear of being caught.