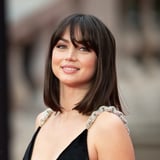 Ana de Armas's dark-brown hair is her signature - but from the looks of a new Instagram post, she recently changed up her look. On April 1, Chris Evans posted a photo of himself and de Armas with fellow actors Lizze Broadway and Tate Donovan. De Armas, who has her arm around Evans's shoulders, is almost unrecognizable with strawberry-blond hair.

Captioned "The Turner Family Farm 💙" with the #ghosted hashtag, the post is a nod to the stars' upcoming movie together. The plot for "Ghosted" is still under wraps, but it's said to be a romantic action-adventure film. As far as we can tell, de Armas hasn't yet revealed her new hair color on her feed, but she reshared Evans's image on her Instagram Stories shortly after he posted it. De Armas appears to have the same dirty-blond hair color in the behind-the-scenes shot of her most recent selfie, but she put a black-and-white filter on it, making it impossible to verify. She captioned her image, "Good days on set. 🧡🌻 #ghosted."

This isn't the first time de Armas has gone blond, but it's been a couple of years since she's worn her hair in such a light shade. She may have been inspired by her role in the upcoming Marilyn Monroe movie "Blonde," which has her sporting a bright-blond curly bob.