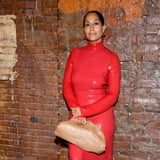 Tracee Ellis Ross can officially add singer to her résumé. Ross, who is the founder of hair-care brand Pattern Beauty, released a lullaby titled "Legacy," which chronicles the importance of hair in the Black community.

Made in collaboration with ROC Nation records, songwriter Kareen Lomax, and poet Amena Brown Owen, Ross explained on Instagram that "Legacy" is "a celebration of the ritual of Black hair care as self-care. A love letter to the traditions that connect us to our lineage through our hair." Through striking visuals, Ross explores the beauty and versatility of hairstyles common in the Black community like braids, afros, and locs, with each frame punctuated by the song's hook "How they love us. . . help us begin our own legacy."

Hair in the Black community has always held a special significance, as styles like cornrows "date back for over 3000 years for women and men, going back to parts of Africa," hairstylist and HASK ambassador Camille Friend previously told POPSUGAR. Not only were certain hairstyles used to signify status in a community, but the time spent creating intricate styles provided the opportunity to bond and socialize. In the United States, the rise in the natural hair movement in the '60s was a direct rejection of the Western beauty ideals forced upon enslaved African Americans and their descendants, and natural hair culture has been thriving since.

Watch the entire video for "Legacy" above, and afterward, join the quest to make hair-based discrimination illegal nationwide by signing the CROWN Act petition.