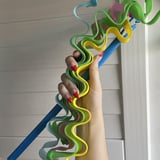 I've voluntarily posted some less-than-flattering photos of myself on the internet during my years as a beauty editor, but this has got to be by far the most interesting situation I've found myself in. And it comes as no surprise that TikTok lead me here. During one of my many late night scrolls, I stumbled upon a video of someone testing out these heatless hair waver ribbons from Amazon so I decided to give them a try.

As someone who doesn't like curling my hair too often with a traditional curling iron or wand - both because of the damage and time it takes - I was excited to test yet another method for styling my hair sans hot tools. TikTok rarely leads me astray so I was hopeful when I ordered the No Heat Wave Hair Spiral Curlers Styling Kit ($23), but even after studying the video a few times, I don't think I was prepared to just how involved this heatless hairstyling hack was. I got 28 ribbons in my kit, as well as a tool that looks like a shepherd's hook.

Putting in the Heatless Wave Ribbons

In the video, TikToker Lauren Wolfe started with a very small piece of hair. While I didn't read the instructions, I figured out pretty quickly that you slip the hook through the waved ribbon then wrap it around a one-inch section of hair and pull it through to secure the ribbon to the hair.

I was a little nervous that my hair would get stuck but having tried an automatic hair curler before and lived to tell the tale, I just went for it. The hardest part is getting a clean section of hair to work with - if you have stray pieces gathered in the hook they can get knotted. I started with a piece at the back of my head: sectioned it, twisted it a few times, looped the piece of hair around the hook, gently pulled it through the ribbon, and voilà.

The Heatless Wave Ribbons In

Working piece by piece, I made my way to the sides of my head and only got stuck a few times but the act of feeding each piece of hair through the spiral ribbons is incredibly time-consuming. A few times, sections took me a few tries to get, which only added to the overall time. When my whole head was finally done, about 35 minutes had passed - just as much time, if not longer, than what it takes me to curl my hair with a hot tool.

Because you apply the spiral ribbons onto dry hair, you have to leave them in for quite a while to set. I put them in in the morning and left them until 2 p.m., which was approximately five hours. During that time I went about my work as usual. When I emerged from my bedroom/office for the first time, my boyfriend pretended to turn to stone because he thought I looked like Medusa. Funny.

Out of all the heatless hair products I've tested, this one was by far the most cumbersome (yes, even more so than the overnight hair ribbon that also went viral on the app.) I couldn't imagine sleeping in them - simply walking around my apartment with them in was annoying enough.

After five long frustrating hours, I decided it was time to take them out. I started with that same piece that I began with at the back of my head and pulled off the plastic ribbon from the bottom. I was pleasantly surprised when it slipped right off without any tugging. The section of hair had a crimped loose wave to it, which gave me hope that it worked so I removed the rest of the ribbons.

Luckily the removal process was quick and painless and only added about five extra minutes to my total time thus far. Some sections of hair had curled better than others but overall, my head was covered in messy waves similar to the salt water-infused ones I get when I'm at the beach all day. They looked a little too wild for my taste to not be sitting ocean side so I grabbed some styling products to try to tame them. I used the IGK Crybaby Anti-Frizz Smoothing Serum ($28) for frizz and the R+Co Reflective Shine Hairspray ($39) to add shine and some hold to the style.

For me, the final look was by no means polished. The spiral ribbons game me more of a messy, naturally wavy look but the user in the video got a similar effect to the Mermade Waver that's also popular on the app (which I had much better success with). Unfortunately, my hair doesn't hold a curl well so the crimped waves fell out pretty quickly. Because of how involved the heatless hair hack is and how inconvenient wearing approximately 18 plastic spiraled ribbons in your hair for five hours is, I can't say I'll be doing this again any time soon but I'm happy I gave it a try. If you regularly style your hair and it holds a curl well, it's worth a shot.