Jennifer Aniston Debuts Bangs For the First Time in Years 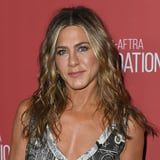 Jennifer Aniston has veered away from her classic, middle-part hairstyle. The actor posted a picture on Instagram with fellow actor Adam Sandler, and we noticed a major update: new bangs. Aniston, who has become known for her blond highlights and long layers, very rarely deviates from her signature look. So while not a complete hair transformation like Billie Eilish's or Florence Pugh's most recent looks, this cut is pretty unexpected from the star.

After taking a closer look, it appears the bangs are a cross between curtain and blunt-cut bangs. We've seen her take on curtain bangs before, but this iteration of the style is in the sandy-blond color she wore in 2014.

Aniston isn't the only celebrity entering the year with a new look. Recently, Winnie Harlow debuted a short bob with bangs inspired by an unexpected source, Kristen Stewart turned heads with an extremely chic haircut with micro curtain bangs, and Hunter Schaefer took her new micro bangs for a spin at the red carpet premiere of season two of "Euphoria."

Though the style could just be for the upcoming movie Aniston and Sandler are working on - she did, after all, caption the photo, "Back to work with my buddy. #MurderMystery2" - we hope 2022 is the year of big hair changes for her. (We firmly believe she would break the internet if she ever departed from her signature blond hair color.) But until then, take a closer look at her new bangs ahead.