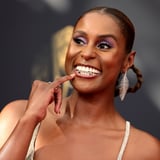 The resurgence of tooth gems has shined a spotlight on another popular form of teeth embellishments: grillz. Searches for the term "grillz near me" are up 200 percent in the past day alone, celebrities like Issa Rae have championed grillz as one of their favorite accessories, and videos detailing how grillz are made have racked up thousands of views on TikTok.

While some people believe that grillz are having a "moment," the trend has always been present in the Black community. Brianna Arps, founder of fragrance company Moodeaux, ultimately got her grillz because of other Black creatives in her circle. "For years I've been surrounded by Black people who express themselves through fashion and who pride themselves in their individuality and being unique," she says. "Once I came across my jeweler, I knew I had to get them."

Others have even been inspired by pop culture to step into making grillz themselves, like Rich Grillz, founder and CEO of Rich Grillz Jewelry and Designs. "I would see grillz on my favorite MCs growing up - everyone from JAY-Z to the Wu Tang Clan," he says. "I was enthralled by the culture of '80s New York City."

Grillz have had a long history in the Black community, but their origins can be traced back as far as the 6th century BC. After the ancient people of Etruria, Italy, were conquered by the Roman empire, nearly all literature about them was lost. However, excavations have found that the Etruscan people embellished their teeth using bands, or wiring, made of gold.

"Etruscan prostheses are made only of gold plus real teeth," Dr. Jean Turfa, research associate at Penn Museum and archeologist with a specialty in the Etruscan civilization, tells POPSUGAR. The use of gold for these embellishments was also an intentional signifier of status. "The burial rituals in Etruria show that gold was desired and respected, since sets of gold jewelry and vases were offered in tombs of the ruling class," Dr. Turfa says.

Differing markedly from their Mayan counterparts, who were the pioneers of tooth embellishments inside the teeth, the Etruscan people were also noted for their embellishments being placed on the teeth, and modern day grillz can be traced back to "overlays [that were done] in the Etruscan style," Marshall Becker, archaeologist and professor emeritus of anthropology at West Chester University, says.

While grillz are now attributed to hip hop culture originating in the United States, gold teeth were also popular outside of the US, particularly with immigrants of the African diaspora. In the 1960s, some Caribbean countries faced an economic downturn, and as such, citizens of these countries started to leave to wealthier countries, like the US. Because gold was a much cheaper way to fill cavities at that time, many immigrants could be seen with gold overlays - not as a fashion statement, but for their dental health. Therefore, when Black immigrants started to migrate to Brooklyn and the Bronx in the 1980s, gold teeth become extremely commonplace in everyday society. Grillz were further catapulted to popularity with the rise in prominence of Southern hip hop, with Eddie Plein being said to be one of the first pioneers in making grillz a part of mainstream hip hop culture.

Once considered something only worn by immigrants or rich rappers, grillz started to become more integrated into mainstream culture when celebrities, like Ryan Lochte, Miley Cyrus, and Katy Perry, started wearing them to high-profile events, like the Olympics and the Met Gala. Though initially receiving some critique for cultural appropriation, these celebrities effectively introduced grillz to a larger audience, and the embellishments can now be seen on runways and in the pages of high-fashion magazines. This has caused some people on social media to call out the double standards in media coverage, saying grillz were considered "ghetto until white people [wore them]."

Still, many believe that grillz will always remain an accessory endemic to the Black community. "The Black community is the champion of the grillz industry," Grillz says. "In places like Baltimore and Atlanta, it is a rite of passage to get a custom pair of grillz."

If you do want to get grillz, there are a few things to note. While there is no formal schooling for jewelers to be able to make them, it's best to go to someone who has the training necessary to create grillz. "Right now the education is not offered through traditional schooling but privately by other master jewelers," Chakara Conyers, founder and CEO of Khaotic Grillz and Tooth Gems, says. At minimum, Conyers says that qualified providers "must learn everything from dental impressions, waxing, casting, melting polishing/buffing, and design methods" in order to be able to provide quality grillz.

While the cost of installation differs based on region, Conyers says that in her native North Carolina, grillz can start from "$300 and go up to the thousands." There are also different versions like "bridge sets and fangs that are dainty pieces that serve as a soft introduction to grillz culture," Grillz adds.

As with many aspects of the beauty and fashion industry, grillz are not a new trend. Though initially a sign of wealth and austerity in ancient Italy, the embellishments have become a mainstream fashion statement that will not be leaving the realms of pop culture anytime soon. Still, if you're considering trying them out yourself, it's important to remember that Black people carried grillz to mainstream popularity and often get erased from the conversation and profits. So when making your decision, consider going to a Black artisan and learning the history of grillz beforehand.