Zendaya’s Dedication to Spider-Man Continues: She Just Got an MJ-esque Red Lob 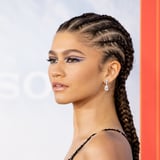 Zendaya is channeling her inner MJ and killing it. The Spider-Man: No Way Home actress took to her Instagram Stories last night to debut an entirely new look: a red-tinted lob haircut. The actress has played around with her hairstyles recently, trying everything from bobs to bowl cuts to jumbo box braids and more, but she typically keeps her curly hair in its naturally light, chocolate-brown color. Hairstylist Sarah Shears, master colorist at The OneEleven Lounge in Hollywood, was behind Zendaya's big change.

But Zendaya's hair transformation didn't stop there - she took it one step further and cut a few inches off her normally mid-back-length hair, resulting in a trendy lob hairstyle that just grazes her shoulders and frames her face beautifully. "We discussed length options from bob to mid-length," Shears told POPSUGAR. "We decided to go with something in between the two - '90s supermodel." Shears used Olaplex products to complete the transformation and finished off the look with her favorite product, Monte Rio Hair & Body Oil.

We aren't entirely sure if the color is here to stay or if Zendaya is just particularly excited to reprise her role as MJ in her highly anticipated film Spider-Man: No Way Home, but the duo really knocked it out of the park nonetheless. Take a look at the transformation below, then let us know when you make that appointment with your colorist for your own take on the hairstyle.