Does Rowan Blanchard Have Any Tattoos? You May Be Surprised to Learn the Answer

Home 2021 November 16 Does Rowan Blanchard Have Any Tattoos? You May Be Surprised to Learn the Answer 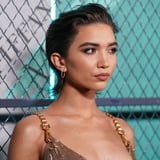 Remember that time Rowan Blanchard appeared on the cover of Culture Mag covered in colorful butterfly tattoos? We probably don't have to tell you that those little drawings aren't real, but the stunning image did get us wondering: does Blanchard have any tattoos of her own? The 20-year-old actor is not one to shy away from bold beauty choices - she's tried practically every haircut, color, and makeup trend under the sun - but she's never openly talked about getting any body art. She could have a hidden tattoo that no one knows about, but it's more likely that she just hasn't decided on the right first design to get yet.

Meanwhile, Girl Meets World costar Sabrina Carpenter got her very first tattoo back in December of 2020 of the word "Lucky" in cursive on the side of her neck. Until Blanchard decides to get any tattoos, we'll be here admiring her amazing makeup looks on Instagram.