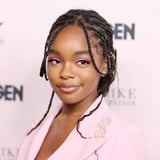 Marsai Martin's latest manicure is as classic as can be. The actress and record-breaking producer recently shared a selection of photos from October so far, which included a mirror selfie prominently featuring her light-pink, almond-shaped nails.

The soothing shade has actually been referred to as the milk-bath nail-art trend, which, as the name suggests, consists of a milky color base, and sometimes nail artists will add dried flowers to create the illusion of an especially luxurious bath. The manicure, which was recently seen on Jennifer Lopez, works as an everyday option but also looks lovely for wedding celebrations. (It will, personally, be making an appearance on my bridal inspiration board.) Take a closer look below.