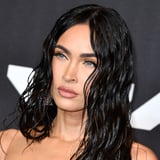 Megan Fox, is that really you? The actress made her Instagram followers stop scrolling and do a double take on Friday afternoon when she posted a selfie showing off her new silver hair color. She didn't permanently dye that signature dark-brown hair of hers, though - it's simply a wig for her upcoming movie, Johnny & Clyde, which is currently filming in Rhode Island and set to premiere in 2022. Fox will play the role of Alana, a crime boss and casino owner, which she seemingly alluded to in her Instagram caption: "This is what the devil's daughter looks like."

Fox's surprising hair transformation is courtesy of Los Angeles-based hair stylist Miles Jeffries, and the hairpiece itself hails from renowned wigmaker Merria Dearman. Fox's sultry wig is parted straight down the center, slightly darker at the roots, and appears to be just as long and luscious as her natural brown hair. The last time the star majorly switched up her look for a movie role, it was the short, blond hair she had for The Battle of Jangsari in 2019.