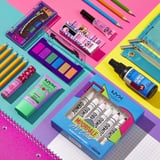 NYX is gearing up to launch its sexiest collaboration yet. The budget brand just teamed up with Netflix to roll out a limited-edition makeup collection inspired by the platform's raunchy British comedy series Sex Education.

Sex Education made its debut on Netflix back in 2019 and it follows the story of a sexually inexperienced teenager named Otis (Asa Butterfield), who, regurgitating his sex therapist mother's advice, teams up with a fellow classmate to start a secret sex-therapy clinic at their high school. The new, gender-neutral makeup collection is set to be released ahead of the show's third season, which officially drops on Sept. 17.

The NYX x Sex Education makeup collection will be available to shop on Aug. 28, and no product will retail for more than $25. Read ahead to get a look at what's included.