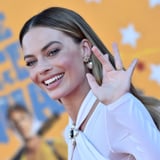 Red hair is having a moment this summer, and it looks like Margot Robbie is the latest celebrity to hop on the trend. The actress, who's currently filming Babylon, the highly anticipated Great Gatsby-esque movie, was recently spotted on set sporting curly copper-colored hair. Opposite Brad Pitt, Robbie is set to portray Hollywood's original It girl Clara Bow, a 1920s actress who happened to rock some beautiful red curls. The Suicide Squad star joined the cast after Emma Stone exited due to scheduling reasons.

Though her fresh transformation is certainly a departure from her usual darker blond, we hope Robbie keeps the red around for a while. From what we can tell from her set photos, she looks pretty gorgeous as a redhead. We last saw the actress with this auburn hue in Mary, Queen of Scots, in which she played Queen Elizabeth I.

Ahead, take a closer look at Robbie's coppery hair color and get excited for the star-studded film.