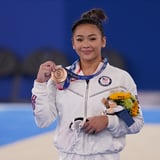 Suni Lee did a thing and got a tattoo of the Olympic rings. #TokyoOlympics (via IG/Story/@sunisalee_) pic.twitter.com/p0oudyqbm9

The Olympic rings tattoo club just gained another member in Sunisa Lee. The gymnast who recently competed in the Tokyo Olympics - and took home the gold medal in the women's artistic gymnastics all-around competition, a bronze on the uneven bars, and a silver medal during the team final - commemorated her experience by getting a tattoo of the Olympics logo last week.

Lee showed off her new ink via a photo shared to her Instagram Story with the caption, "Did a thingggg." Last month after the USA women's gymnastics team returned stateside following the competition, members Jordan Chiles and Grace McCallum revealed in an interview with People that they all had plans to eventually celebrate their wins with tattoos.

"I think all of us. All of us," Chiles said. "Yeah, I think we are all. Except for Simone, because she already has one. I already know where I'm getting mine." Lee got her tattoo on her right forearm, which is in the same spot that Biles got hers in all-black ink back in 2016 after competing in Rio. According to the aforementioned interview, Chiles's tattoo will be on her inner elbow.