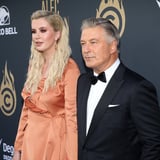 Ireland Baldwin got a new tattoo this week, and while it's safe to say that she's digging the design so far, we can think of at least one person it might need to grow on: her dad, Alec Baldwin. The model shared a photo of her new ink via Instagram on Aug. 15, and it's an illustration of a half-naked woman posing with a feather headpiece on. Most of the comments underneath the post are fairly supportive, praising the artwork by her tattoo artist Parker Benayoun, though Alec Baldwin voiced his thoughts on the piece with one simple word: "No!"

The actor commented on the photo shortly after Ireland shared it, and while his reaction is one we'd definitely expect to see from a parent, we're willing to be that he was just joking. Shortly after revealing her tattoo, Ireland addressed commenters saying that the woman in the drawing looks like Kendall Jenner. She set the record straight via Instagram Stories, explaining that the tattoo is a nonspecific illustration of a woman from the '60s.