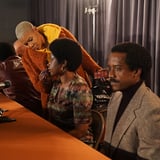 Transforming one generation's music legend into another generation's music legend sounds like it'd be no easy feat, but for Stevie Martin, the lead makeup artist tasked with re-creating Aretha Franklin's iconic looks on Jennifer Hudson in the newly released Respect movie, there was a lot of material to rely on - including past footage and insights from Franklin's family themselves.

"I worked alongside and took suggestions from the director, Liesl Tommy, who spoke with the family on how to create makeup looks that were authentic and historically accurate as possible," Martin told POPSUGAR. "I didn't use the actual products Aretha used or that were popular during that time period. I did, however, make sure I duplicated her must-have iconic looks and staples from the time period, including winged eyeliner and signature brows."

"Having Aretha Franklin photos posted in the trailer for inspiration and listening to music on the speaker out loud helped us really channel Aretha when creating the makeup looks."

To create the winged eyeliner looks that Franklin wore throughout her career, Martin relied on long-lasting drugstore staples like the NYX Professional Makeup Matte Liquid Liner ($7). Other products she used to the last drop on set included the Face Atelier Ultra Foundation Pro ($37), the Symart Butter Oil ($15), and the Laneige Lip Sleeping Mask ($22), all of which stayed in place during long days of filming even as Martin used makeup to mimic the appearance of sweat while re-creating the looks from Franklin's most memorable performances.

"Being on stage, Aretha would sweat a lot, so I had to create a formula that both simulated sweat and maintained the integrity of the makeup while shooting," she said. "I wanted the looks to be as authentic as possible."

On working with Hudson for the film, Martin noted that the singer was very committed to the role, which made it that much easier to transform her into the legend on set every day. "[Hudson] would watch each of Aretha's performances in the makeup chair before the scenes to help us really get her into character," she said. "Having Aretha Franklin photos posted in the trailer for inspiration and listening to music on the speaker out loud helped us really channel Aretha when creating the makeup looks."