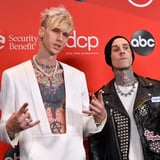 Travis Barker and Machine Gun Kelly are close friends and frequent collaborators who, back in August 2021, celebrated the upcoming release of their newest project in the only way that makes sense: with matching tattoos. The addition to both artists' already stacked collections is a matching forearm tattoo of the phrase "born with horns" in a bold font.

As they revealed via separate Instagram posts shared on Aug. 9, "born with horns" is a reference to MGK's upcoming album of the same name. "'Born with horns' the album. we're back for round two . . ." the captions read. Except there was a little mishap with that - MGK ended up going with a totally different name for the album: "Mainstream Sellout."

According to "Entertainment Tonight," the singer revealed on Monday's episode of "The Ellen DeGeneres Show" that he "couldn't bring [himself] to tell Travis" that he wanted to go in a different direction for his sixth studio album's name. "We were so hyped," MGK said. "We had just done a song and we were like, 'There's a tattoo artist here. Let's just get the name tattooed on us.'" But a few months later it hit him, "Ah, that's definitely not the name of the album anymore."

According to a tag on Barker's photo, the tattoo was drawn by Chuey Quintanar, the Long Beach-based artist who also drew the tattoo Barker got earlier this summer of Kourtney Kardashian's name on his chest just months after the couple announced they were dating.

This upcoming album, set to release in March 2022, will follow last year's "Tickets to My Downfall" (which MGK also has a tattoo of on his neck), and Barker will serve as an executive producer. Though the album title has changed, a tattoo is still an epic way to announce new music.