What Do Joe Keery, Mila Kunis, and Kristen Bell Have in Common? Their Bathing Habits

Home 2021 August 6 What Do Joe Keery, Mila Kunis, and Kristen Bell Have in Common? Their Bathing Habits 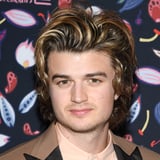 Ashton Kutcher, Mila Kunis, Kristen Bell, Jake Gyllenhaal, and Joe Keery were all in the news recently, but probably not for what you'd think. All five celebrities made headlines for . . . their bathing habits. Allow us to explain.

In an interview with Vanity Fair on Aug. 5, Gyllenhaal made mention of his bathing ritual (or lack thereof): "More and more I find bathing to be less necessary, at times." He went on to quote the Elvis Costello song "New Lace Sleeves" and said, "I do believe, because Elvis Costello is wonderful, that good manners and bad breath get you nowhere. So I do that. But I do also think that there's a whole world of not bathing that is also really helpful for skin maintenance, and we naturally clean ourselves."

He's not alone - in an interview with GQ, Keery said he does not "get" haircuts, nor does he wash his hair. This comes weeks after July 27, when Kunis and Kutcher went on Dax Shepard and Monica Padman's podcast, Armchair Expert, and talked about their unique showering habits. "I don't wash my body with soap every day," Kunis said. "But I wash pits and tits and holes and soles." Kutcher added: "I wash my armpits and my crotch daily, and nothing else ever."

Shortly after the internet exploded over the news, Bell chimed in on Aug. 3 with her support on an episode of The View. She explained she and Shepard used to bathe their kids daily but then stopped. "We forgot," Bell said. She continued, "I'm a big fan of waiting for the stink. Once you catch a whiff, that's biology's way of letting you know you need to clean it up."

But despite how popular Bell's "wait for the stink" philosophy is among the above crowd, the divide their words caused on the internet (mainly, Twitter) makes it very clear that it's not a popular opinion. But, it's not necessarily wrong - at least according to some experts.

How often you should - or shouldn't - shower depends on many different factors but, according to NYC-based dermatologist Joshua Zeichner, MD, "Under normal circumstances, showering every day is not necessary." That said, "you should wash areas like your face, groin, and underarms daily," which is what Kunis and Kutcher said they do.

Dove dermatologist Mona Gohara, MD, added: "At the end of the day, it's all about preference, but I recommend daily showers or at least every few days as skin health truly begins in the shower." We say: to each their own, but when in doubt, you should probably shower.