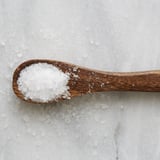 and this makes so much sense. sea salt is healing. #acne #clearskin #seasalt #fyp

At this point, it's safe to say we've lost count of all the beauty tricks we've picked up on by simply scrolling through TikTok. The app is basically a goldmine for all sorts of buzzy beauty info, and considering not everyone has access to doctors, dermatologists, and aestheticians who can provide this kind of information regularly, it's nice to be introduced to game-changing hacks that have the power to change your skin for the better. On the flip side, there's also always a handful of bizarre trends - specifically those that are said to fight acne - that maybe sound like they'd be helpful in theory, but really . . . aren't.

The latest acne hack that some TikTokers are swearing by these days involves sea salt water, which they're claiming can be used to clear up acne when applied to the skin. User @leacrylics shared a viral video back in June stating that she began mixing sea salt that she purchased at a grocery store with water and spraying on her face every day to clear up a bad breakout after noticing that her skin improved following a trip to the beach. A second user named Aubyrn Jade who took the advice shared her own video a few weeks later claiming that, despite having acne for most of her life, spraying sea salt water on her face twice a day for a certain period of time actually showed her promising results.

So with this in mind, can sea salt water actually work to treat acne? Not exactly. According to cosmetic chemist Hadley King, there's no real data to support these claims, and even though people on TikTok claim to have seen differences in their skin after the fact, there are plenty of other derm-recommended acne treatments out there that have proven to be more effective and reliable.

"The salt could help to dry up pimples, and [in turn] there could be a mild anti-inflammatory effect," she told POPSUGAR. "But we have much better, science-backed options."

According to King, the people putting the hack to use believe sea water balances skin pH and kills bacteria, though this isn't really the case. "Acne-prone skin has an alkaline pH and sea water also has an alkaline pH, around 8," she said. "You'd want to use an acidic pH like salicylic acid or glycolic acid to be helpful. Although sea salt water does have antimicrobial properties, they're not really strong enough to squash acne."

In short, everyone's skin is different, but if you're able to, it's always more helpful to see a dermatologist or professional about your skin concerns than following a trend from social media.