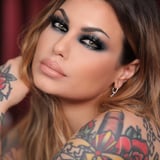 Most people would say that makeup and true crime are in no way related to each other, but Bailey Sarian would beg to differ. When she first started on YouTube in 2013 after working at Sephora and Urban Decay and as a bridal and celebrity makeup artist, she was creating your typical makeup tutorials like every other beauty vlogger on the platform. But in 2018, when the Chris Watts case hit the internet, that changed.

"I was just following everything I possibly could on the story and so I had all this built-up knowledge on the case and nobody to talk to about it with," Sarian told POPSUGAR. "I was like, 'Maybe I should make a YouTube video where I talk about it.' And then I thought, 'Well, I'll do my makeup at the same time, just so it makes sense to my YouTube channel.'"

"I was nervous that the feedback wasn't going to be very good because I'm talking about murder and then doing my makeup."

She didn't make the video right away. "I was nervous that the feedback wasn't going to be very good because I'm talking about murder and then doing my makeup," she said. Then, in January of 2019, she decided to go for it. The video took off overnight. "I think within the first 24 hours, I got 60,000 views and that, to me, was groundbreaking, because I was averaging at 10,000 views on my videos at the time. I was like, 'Oh my God, I think I'm onto something here.'"

In that first video, Sarian introduced herself and said, "I just want to sit down and get ready and then also talk about crime, murder mysteries, stuff like that. . . I don't know." She then continued somewhat nervously and said, "I don't even know how to approach this without sounding insensitive at all." It's clear at the time she was apprehensive about filming the video - she had no idea that she was about to take off. "YouTube, it's a big community, so standing out from everybody else can be really difficult."

Her channel exploded from there. She began uploading true crime videos every Monday, which is how it morphed into the series that it is today: "Murder, Mystery, and Makeup."

Her video on Chris Watts now has over 8.5 million views and her channel over five million subscribers. Every time she uploads a video, her fans immediately send in requests for the next one. "If I keep seeing a name pop up over and over again or a name that I've never heard of, I just look into it," said Sarian. "I also have a long note list of different topics and stories I can talk about. I pick a name, start Googling, and then I just go from there." Almost nothing is off limits - except she tries to avoid unsolved mysteries because she "absolutely hates" them. "I need closure, or I stay up all night thinking to myself trying to put the pieces together, like I'm going to solve it or something."

The creative process for making a video usually takes two or three days. She writes out a script from start to finish that covers the person's upbringing and crimes and then the aftermath, but she doesn't read from it verbatim. "Usually, by the time I get to filming, I have done so much research watching tons of documentaries, reading different articles, reading little autobiographies, and watching any type of movie I can on it, I feel very comfortable with the story," Sarian said.

Researching the topic and getting all of the little details just right - like names and dates - takes priority. The makeup comes last. "Everyone always asks, 'Why do certain killers get a glittery eyeshadow look?'" said Sarian. "Honestly, the makeup is always an afterthought. I sit down and I'm like, 'Okay, I want to do a purple smoky eye today,' and then that's what I do."

Sarian is well aware that the topic at hand is serious and the medium in which she presents it is unconventional. Even though she tells these stories with a casual tone, she sprinkles in a fair share of disclaimers and warmings throughout. "I try to be very careful about telling these stories and make sure that I'm not going into graphic detail about certain things," she said. "I just feel like it's not really right when I'm doing my makeup. I try to approach it best as I can and just keep the story pretty straightforward."

Clocking in at 30-plus minutes long (with most averaging around 40 minutes), Sarian's videos are longer than most makeup tutorials on YouTube, and yet, she has her viewers hooked like a good Netflix show from start to finish. Despite the gruesome nature of the subject, her true crime chats leave you feeling like you just got off the phone with your best friend.

"I get tons of messages every day from followers [and] subscribers telling me that I've helped them through quarantine," said Sarian, whose view count went up during 2020. "I helped with their stress and their anxiety, which is weird because the stories are so morbid, you'd think it would add to all that, but for some reason, they find me calming."