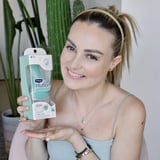 Body hair and what you do with it is a personal choice, but for many people, that choice is heavily influenced by external factors like society and the environment in which you grew up. Without even being conscious of it, many people from young age are taught through images of hairless bodies and advertisements to believe that body hair on women is "bad" and should be removed, but if you couldn't see your own body hair you'd probably feel differently.

"I didn't grow up with a mom who shaved or waxed so I never felt this pressure like, 'Oh, I must do this,'" Molly Burke, a digital content creator, told POPSUGAR. "Being blind, I couldn't see [my body hair] at all so it didn't bother me in a visual way."

Unfortunately, that didn't stop others from putting their beliefs onto her. "It bothered other people looking at me. They would make fun of me." That's why she ultimately decided to remove it: "At 11, you want to do anything to stop people from making fun of you," she said.

But that was short-lived. Not long after joining YouTube and simultaneously embarking on this journey of self-discovery and self-love, her reason for removing her body hair became more personal. "Working in social media, I can't care about what my bullies have to say about me," said Burke. "So, for me now, it absolutely has nothing to do with what other people's perceptions or thoughts are of me. I think I let go of that side of it a long time ago."

What many people don't realize is that many forms of at-home body hair removal aren't inclusive of people living with disabilities. At 25, Burke discovered that when she picked up a razor for the first time. She found juggling a razor and shaving cream to be "very, very messy" and not functional for someone who's visually impaired.

"For me, shaving via touch, the thicker the shaving cream, the more distorted my feeling is," she said. The fluffy coating of shaving cream distorts the feeling of her skin and makes it hard to know where to position the razor next, but the Schick Intuition Razor ($15) changes that. That's why Burke jumped at the opportunity to partner with the brand for its "Content For All" initiative surrounding the razor, which focuses on accessibility and creating inclusive content through alt text, CamelCase, proper captioning, narration, and more.

"The two-in-one razor is amazing because it eliminates the need for shaving cream because it has the built-in moisturizing bar; it's such a thin consistency," she said. But it still eliminates any friction caused by shaving dry, which is also important.

While some people may shy away from "taboo" topics, such as body hair, weight gain, and periods (all things she tackles from her perspective regularly), Burke relishes the opportunity to talk about these things with her 882K followers on Instagram. "I, as a disabled woman, have faced so much discrimination in my life. I have faced so many misconceptions and stereotypes, and come across people who believe these strange myths all the time. I've realized that all of this comes from a lack of information - a lack of education," she said. "People aren't given access to talking about body hair in a safe, comfortable way, and so if I can create a safe space to not only talk about the things that have affected me, like misconceptions around blindness, but to talk about all things that people are affected by, then I want to do that."