It May Be Brutal Out Here, but These Sour Manicures Are Anything But

Home 2021 June 29 It May Be Brutal Out Here, but These Sour Manicures Are Anything But 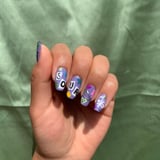 Olivia Rodrigo dropped her debut album, Sour, just over a month ago, and within days of its release, it had already solidified itself as a classic. The project has been praised by critics over the last few weeks for its '90s teen-anthem vibe, but its angsty lyrics have inspired more than just a few thousand Instagram captions. People are showing their support for Rodrigo's body of work by creating Sour-inspired manicures - and they're all so damn good.

Most of the nail art that's out there mimics the album's cover art, which features Rodrigo posing in front of a lavender background with a multitude of stickers on her face and the word "sour" spelled out on her tongue in cutout letters. Read ahead to check out some of our favorites.