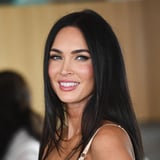 Megan Fox is showing off a rainbow french manicure in honor of Pride Month. On June 26, the 'Till Death actress shared a few photos of her colorful nail art on Instagram along with a caption celebrating her sexuality. "Putting the B in #LGBTQIA for over two decades," she wrote.

Fox has been open about her sexual identity for many years, and told Esquire in 2009, "I think people are born bisexual and they make subconscious choices based on the pressures of society." She continued, "I have no question in my mind about being bisexual." Fox is also a consistent advocate for LGBTQ+ rights and charities, highlighting two organizations - MoveOn and Into Action - which advocate for underrepresented communities. Get a closer look at Fox's celebratory nail art in the photos ahead, as we let the Pride festivities continue.